It looks like you're trying to zoom in on this page. For best results: use the most recent version of your browser, disable your browser's 'zoom text only' setting, and use your browser's default font size settings.

The endowment represents the generosity of generations, carefully managed to best serve the university’s mission and ensure its longevity.

The endowment is the university’s largest revenue source, but most may be spent only on specific purposes.

The endowment is the university’s largest revenue source, but much of it may be spent only on specific purposes.

About one-third of the annual operating budget comes from Yale’s endowment, a collection of thousands of funds, most of which have been designated to support specific aspects of the university’s core mission. Approximately 75% of the endowment is restricted; the university is legally required to use these gifts only for their stated purposes. 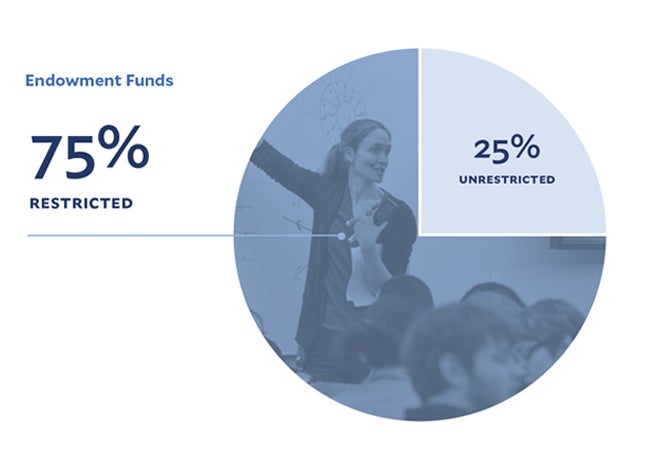 The endowment serves to ensure intergenerational equity, which allows future generations to benefit from the same excellent resources available today while avoiding the burden of sustaining existing programs or managing deferred maintenance on buildings. Unlike with a savings account or a rainy-day fund, only a portion of any fund is available for spending in any given year, in order to preserve the endowment’s longevity.

The endowment’s impact begins with the generosity of generations of alumni and friends who believe in Yale’s mission; its stability is achieved through thoughtful investment and prudent spending.

Yale’s investment strategy has over decades generated substantial returns for the university through the independent and long-term thinking of the Yale Investments Office (YIO). Many of the YIO’s members are Yale alumni, drawn by the purpose-filled, collegial culture and opportunity to help carry out Yale’s mission.

The YIO’s pioneering incorporation of modern portfolio theory to build a diversified set of investments has allowed for greater sustained growth with lower risk, advancing Yale’s strong financial position. Over the last several decades, Yale’s investment gains added tens of billions of dollars in value, relative to an index strategy that allocates 60% of holdings to stocks and 40% to bonds.

Yale’s financial strength has been built through a balance of these strong long-term returns and disciplined endowment spending. Each year, Yale aims to spend 5.25% of the endowment’s value, the amount projected to be sustainable given reasonable long-term growth expectations in the endowment’s value, after adjusting for inflation. Over the course of a decade, Yale spends about half of the total value of the endowment; at the current rate of spending, without growth through investment, the endowment would be entirely depleted in less than 30 years. 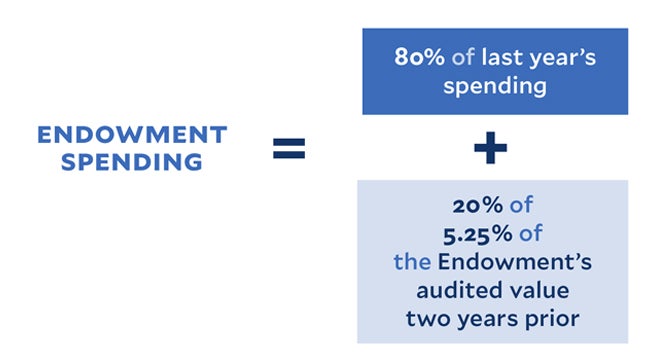 Adherence to a spending policy designed to smooth the impact of short-term fluctuations in the endowment’s market value is critical. In short, smoothing leads Yale to spend more as a percentage of the endowment when the endowment value drops than when it is rising. This creates a cushion when endowment returns fall and instructs discipline when they rise.

Read more about the endowment, its impact, and its stewardship.

As Yale’s needs and ambitions evolve, additional resources are needed to meet them. Donors across many generations have supported Yale’s mission by providing gifts earmarked to support specific priorities. About 75% of the endowment is restricted in this way. The remainder supports core aspects of the budget that are not covered by the restricted funds. For instance, roughly half of the undergraduate financial aid budget is covered by restricted funds; the rest comes from unrestricted funds in the endowment.

Yale’s world-altering objectives—in climate science, in international relations, and in neuroscience, for example — are expensive. New fundraising helps pay for cutting-edge technologies, new initiatives and new or renovated buildings in which to undertake them, sustainable building and energy needs, and increasing diversity and equitable access.

Read about Yale’s strategic vision and the five-year capital campaign, “For Humanity.”

Support for Faculty, Staff, and Students

The endowment supports every aspect of the university — including comprehensive financial aid and its key academic priorities.

Endowment money helps maintain current operational needs and ensures that the university’s commitment to excellence can be sustained over time. It supports Yale College’s six-to-one student-faculty ratio; digitization projects across the university’s museums and libraries that facilitate greater access to collections; competitive salaries and benefits for faculty and staff; and hiring and outreach initiatives within the wider New Haven community, including the largest voluntary financial contribution of any American university to its home city.

Endowed funds created by Yale’s donors have also allowed the university to offer comprehensive financial aid for students —from its pioneering policy of need-blind admissions (one of only six colleges and universities in the country to apply this policy to all applicants, regardless of citizenship or immigration status) to its commitment to meet the full demonstrated need of every student.

Since 2006, the annual budget for undergraduate financial aid has more than tripled, from $59 million to over $218 million; over the same period, the percentage of Yale College students graduating with loan debt has fallen from 43% to 15%. Most recently, the university has reduced the undergraduate student share in financial aid packages. Families with a total gross income of less than $75,000 are not expected to make any financial contribution toward their child’s Yale undergraduate education, and for families earning less than $110,000, Yale is the least expensive four-year school in Connecticut.

The endowment subsidizes the education of every student at Yale College, because tuition only covers about 50% of the full cost of a Yale College education, even for those who don’t receive financial aid.

Nearly every student in Yale’s Graduate School of Arts and Sciences receives financial aid in the form of tuition discounts, stipends, and health insurance, while many students in the professional schools receive university-administered scholarships or loans. And some professional schools, through the generosity of donors, are now tuition-free, including the David Geffen School of Drama, the School of Music, the Institute of Sacred Music, and the Yale Divinity School (for students with demonstrated need).

The endowment also provides support for key academic priorities that further the university’s commitment to research, scholarship, and education and have significant global impact. These include quantum computing, biomedical sciences, and data-driven social science that informs sound public policy. It supports major capital projects such as the newly opened Humanities Quadrangle; initiatives such as the Planetary Solutions Project, a cross-disciplinary effort to identify and advance solutions to environmental crises across the globe; faculty appointments in expanding departments such as Ethnicity, Race, and Migration; and the transformation of the Jackson Institute for Global Affairs into the Yale Jackson School of Global Affairs, the first professional school created at the university since 1976.

Over the past decades, Yale’s endowment also helped build the foundation for the medical, social science, and data science research that rapidly advances our knowledge of and response to COVID-19.

Check our Frequently Asked Questions page for answers to common questions about Yale’s endowment and budget.